Call Me By My Name: The Cultural Significance of Names in the Workplace 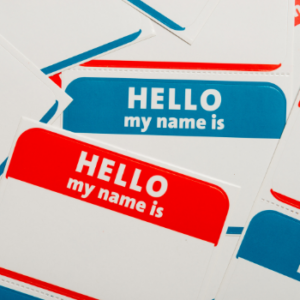 Dale Carnegie once said “a person’s name is to him or her the sweetest and most important sound in any language.” There is a great deal of truth to this. Being addressed by our name does more for us than elicit an automatic reaction. For so many of us, our names are the foundation of who we are, and tell so much of our story.

Names have different significance in different cultures. Some given names are family names that get passed down through generations, which can make someone the fourth, fifth, or even sixth person to carry on the same name in their lineage. Ashkenazi Jewish cultures and Japanese Buddhist cultures commonly use necronyms – giving new babies the same name as a deceased relative, or holy figure, as a sign of honour and respect. Many other cultures commonly utilize a father’s or grandfather’s middle name in addition to a middle name, signifying any person’s automatic ties to their roots.

As society and the workplace becomes more diverse, there are a variety of names which may be unique to you, and admittedly may be hard to pronounce at a first glance. Yet a person’s name is as important to them as yours is to you, and honouring a diverse range of names in the workplace has served to make businesses stronger and more inclusive given these changing times.

The Canadian Press recently profiled a lawyer named Janani Shanmuganathan, and her professional struggle to have her name recognized, and used broadly. In law school it was frequently recommended that she ‘take her husband’s name,’ or shorten her name as she would find it easier to attract clients. Judges at times refused to address her by her name in court, often addressing her as ‘counsel’ while addressing her colleagues with more familiar names. Instead of changing her identity though, Shanmuganathan is determined to use her name in order to increase representation for Tamil women in the legal profession. In Shamnuganathan’s words, “there is something more dignified in a name.”

She is not alone. Until recently, historical racial biases that remained in workplaces have traditionally led to hiring employees with less culturally identifiable names. There are countless examples of first-generation Canadians ‘whitening’ their names on a resume in order to achieve consideration. Yet, as workplaces have begun to place a greater emphasis on diversity, candidates with more unique names are being recognized as themselves, and are increasingly valued for what they are able to bring to a workplace without needing to recast themselves for acceptance.

One major challenge is trouble with pronunciation. Many workplaces are subject to what Sonia King, the Canadian Research Chair of identity, diversity, and inclusion at Rotman School of Management calls ‘benevolent racism.’ Senior leadership in the workplace may be more than comfortable hiring a diverse workforce, but they are often afraid of mispronouncing someone’s name and offending them, and thus automatically deliver assignments to those with more familiar-sounding names. To combat this, several large organizations, and more recently LinkedIn have begun offering an audio clip to accompany someone’s name, where you can hear the person say their own name to provide guidance on pronunciation. Once those names become familiar to pronounce, they should be no harder to say than your own.

The actress Uzo Aduba of Orange Is The New Black fame may have explained it better. Her full name is Uzoamaka, which in the Igbo Nigerian language means “the road is good.” She explains that as a child her name was constantly mispronounced, and out of frustration she asked her mother to call her Zoe. Her mother replied, “if they can learn to say Tchaikovsky and Michelangelo and Dostoyevsky, then they can learn to say Uzoamaka.”

While there is a strong cultural significance in unique names, there is also a right way and a wrong way to inquire as to their origins.

It may be tempting to ask someone with a name that is unfamiliar to you “where are you from?” Doing so may present a human rights issue that is completely avoidable through better education. Ontario’s Human Rights Code prohibits discrimination on grounds including race, ancestry, place of origin, and ethnic origin among several others. While the question may have innocent and genuine intentions, it will often be received as hostile and uninformed. It inherently creates a sense of ‘otherness,’ especially among those born in Canada who proudly carry their cultural roots as part of their broader identities. For Indigenous Canadians, it can evoke significant cultural memories of colonization, when names were forcibly changed in order to bury a person’s roots.

Instead, take the time to learn how to pronounce someone’s name if it is unfamiliar. Most people would be more than happy to take an extra moment to teach someone genuinely curious how to properly pronounce their name. Some individuals may be proudly willing to share the stories and meanings behind their unique names, yet others may not, so it is best not to pry. Remember that just because someone has a name that you may not have heard before, that does not mean that they were not born in Canada, or that English is not their first language. Maintaining these beliefs, however unconsciously, creates a problematic sense of bias within the workplace.

Using someone’s proper name in the workplace may not even seem like a second thought. Yet to someone who has traditionally been told to shorten or hide their name to make it more palatable, that recognition is everything.

For employers, make the effort to learn your employees’ names, and how to pronounce them. Recognizing anyone by name is a strong gesture of acknowledgement and makes them feel like a valued member of the team no matter how large your organization. Our sister company MaxPeople frequently works with employers at creating diversity policies that celebrate and promote uniqueness, and would be pleased to consult with you on yours.

We also represent employees who have been discriminated against both in obvious and subtle ways due to their cultural differences, and neither is appropriate. Reach out to us at [email protected] or complete our contact form here.