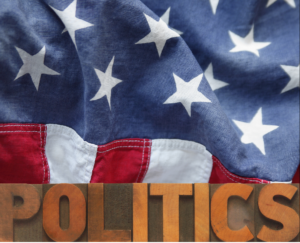 We’ve just come through a major US election, one which polarized not just that country but held much of the world in its grasp. Rarely have two parties shown such a deep divide in their ideas and beliefs, which has led in turn to a divisive political climate. Even in Canada, it is difficult to speak about the current state of American politics without eliciting strong emotions.

As a result, there are certain places where it’s become ‘taboo’ to talk politics altogether. While many of us joke about having that lone conspiracy theory-loving relative who makes family get togethers an adventure, it can often be best practice not to discuss politics at a large family gathering. Similarly, when meeting new people at a party, it can often be considered taboo to talk openly about your political affiliations, especially if they may be controversial.

So, when is it okay to talk about them in the workplace?

First, as a disclaimer, we at Rodney Employment Law pride ourselves in being completely non-partisan. We welcome clients from all political parties and affiliations, and we are happy to help you with your employment law issues no matter your political stripes. This blog is not intended to be an endorsement, nor condemnation, of any one particular party or politician.

However, we would be remiss not to use some recent examples in order to outline what is, and is not, acceptable for the workplace.

Generally speaking, an employee is not violating a law and/or workplace policy by tastefully and discreetly showing a political or party affiliation in the workplace, so long as it does not discriminate against an individual or group, and does not disrupt the ordinary course of business. It is likely innocuous for an employee to casually mention past political volunteer experience on their resume, or to display a holiday card that they’ve received from a local representative displayed on their desks.

However, problems can arise when a person has an affinity for inflammatory political rhetoric, where such speech would not reasonable behaviour that would be welcome in the workplace. For example, much of the political discourse south of the border in recent years has included incendiary comments about women, persons with disabilities, and derogatory comments about people from a wide array of races and ethnicities. Admittedly such topics are less mainstream within Canadian politics, and our political traditions place a strong emphasis on civility and decorum in all politician’s behaviour.

Yet the contrast is a unique one when viewed through an employment law lens. While this sort of rhetoric may just be political blustering in the United States, in Ontario these sorts of comments in the workplace would be strictly prohibited by the Ontario Human Rights Code (the “Code”). The Code offers employees protection against harassment in employment based on place of origin, citizenship, gender identity, disability, etc. If an employee were to publicly vocalize, or even praise such ideas in the workplace and the employer chose not to penalize such conduct, both the employer and the employee could easily be subject to a human rights complaint from individuals in the workplace who were the subject of such attacks. The Ontario Human Rights Tribunal has the power to compensate an employee hurt by these comments for any injury to their ‘dignity, feelings, or self-respect,’ which is an almost inevitable injury for someone who is a target of these remarks.

Furthermore, the most recent US election cycle, especially as it coincided with lengthy COVID-19 lockdowns, has raised even more interesting questions about what political conduct is allowed, and more recently what constitutes the workplace?

Take, for example, President Trump’s infamous ‘Make America Great Again’ (“MAGA”) hats. The slogan on the hat itself does not target any particular group, but the politics that it represents have been incredibly controversial, and thus wearing it in a workplace would be sure to elicit strong reactions. In 2017 a Hamilton, Ontario judge was suspended for 30 days after he wore the hat in court. The judge claimed that he did not support the President, rather he found the hat amusing, but his actions were found to be “an unacceptable expression of partisan political views” by the Ontario Judicial Council. Most Ontario employees are not bound by such strict rules of impartiality but wearing a MAGA hat to any office would certainly get a reaction from one’s colleagues.

The other question ultimately moving forward into the coming winter is ‘what constitutes an office’ for these purposes? There are no prohibitions against one proudly displaying their political affiliations in their private home. Yet, as so many Canadians are working from home for the foreseeable future, the division between home and office is increasingly blurred and the home office is quickly becoming the primary workplace for so many. So while it may be perfectly alright to hang your political paraphernalia up at home, those boundaries may change when you’re on a video conference with clients or colleagues from your home office, especially if what is displayed behind you is particularly objectionable or prohibited under the Code.

Ultimately, employers have the power to choose what is and is not acceptable for the workplace. They can set guidelines and policies  about the smallest details of workplace conduct, from no mugs on desks to no political material or conversation in the workplace – the latter of which would do much to put some of these concerns at ease. Employees have a right to be free from harassment and discrimination in the workplace, both from their employer and from their fellow co-workers, and prohibiting anything that inspires such conduct would assist in keeping it out of the workplace entirely. Lastly, the Canadian legal framework is vastly different from our American neighbours in that our freedom of speech is not absolute like it is in the U.S., and it is subject to reasonable limits in place to prohibit the sort of hate speech that occurs in controversial American news stories.

For employees, feel free to contact Rodney Employment Law if you believe that you have been harassed at work. We can work with you to assess the strengths of your case, and help you make smart choices about your next steps. For employers, contact us today to help establish firm workplace policies that will protect both you and your team, and help to avoid these sorts of challenges before they even arise.