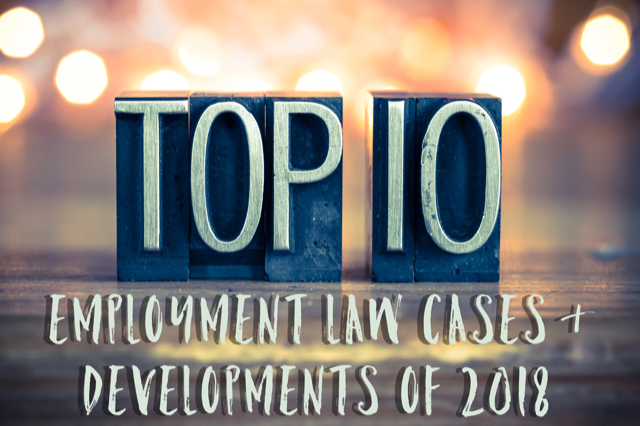 2018 started off with a bang as the Fair Workplaces, Better Jobs Act (“Bill 148”) came into effect on January 1, 2018. Bill 148 resulted in the most significant amendments to Ontario’s employment legislation, the Employment Standards Act (the “ESA”), that the province had seen in over a decade.

Chief among the amendments included: a 29% increase to minimum wage, mandatory paid sick days and an increase to paid vacation entitlement. However, due to the significant amendments coupled with a rushed timeline, many experts within the industry agreed that Bill 148 simply amounted to too much, too soon. Unsurprisingly, shortly after Bill 148 came into force, businesses of all sizes began to experience significant operational challenges, resulting in rising costs for consumers and a mixed bag of entitlements for employees.

2.  Courts Offer Further Insight into the Employee’s Right to Receive Bonuses During the Notice Period

In February and April 2018, the courts provided further guidance pertaining to the employee’s right to receive discretionary bonuses following termination.  In the recent cases of Bain v UBS Securities Canada Inc. and Singer v Nordstrong Equipment Limited, the courts confirmed that employees may still be entitled to bonuses earned up to and during the notice period, even if the bonus was considered “discretionary” or would not have been paid out before the end of the notice period. The courts indicated that they will consider the language in bonus plans and the history of bonus payments in determining if the employer followed a “fair and identifiable” process when deciding to deny a discretionary bonus.

These cases greatly emphasize the importance of having well-drafted and enforceable agreements that clearly and unambiguously limit the employee’s right to discretionary bonus payments upon termination. Contact us today to make sure you have proper agreements in place to reflect these developments.

In May 2018, the Human Rights Tribunal of Ontario (the “HRTO”) released an interim decision in Talos v Grand Erie District School Board, declaring that a section of the province’s Human Rights Code allowing employers to cut workers’ benefits when they hit 65 was unconstitutional. In its decision, the Tribunal concluded that this section constitutes “age discrimination” and accordingly, violates the universal equality guarantee set out in Section 15 of the Canadian Charter of Rights and Freedoms.

While the HRTO cannot strike down legislation, if this issue reaches the Supreme Court of Canada and the nation’s top court adopts the same reasoning, the potential impact of this decision may be huge. It could result in higher labour costs if employers are required to continue employees’ benefits well beyond age 65. This is a development that you will definitely want to stay on top of!  Stay tuned for further updates.

Read our recent news articles on this significant decision:

Given that most of Ontario’s employees are governed by the province’s employment legislation (the “ESA”), provincial elections are always given special consideration at our Firm. However, what made the June 2018 provincial election especially interesting was the great ideological disparity between the two frontrunners, Doug Ford’s Progressive Conservatives and Andrea Horwath’s New Democratic Party.

Thus when the notoriously “pro-business” Progressive Conservative, Doug Ford was elected into office, and he began publicly sharing comments like “We’re going to make sure we’re competitive around the world” and “We’re going to make sure we protect the front-line workers” – we knew it was only a matter of time until he started to put his stamp on employment law in Ontario.

In anticipation for legalized cannabis throughout Canada, the Ontario government introduced the Smoke-Free Ontario Act (the “SFOA”) in late 2017, effectively creating a single legislative framework to regulate tobacco, cannabis and vapour products throughout the province. The SFOA officially came into force on July 1, 2018, and greatly expands upon the prohibitions and posting requirements founds in earlier Acts.

For instance, employers are obligated to ensure that no person consumes tobacco, cannabis or electronic cigarettes in enclosed workplaces or designated area over which the employer exercises control. Further, employers are required to post designated signs at both the entrance and exit of the workplace to “to ensure that employees and the public are aware that smoking and the use of electronic cigarettes is prohibited.” If your organization requires assistance complying with this new legislation, contact us today!

On October 17, 2018, the Cannabis Act officially came into effect, permitting Canadians to legally purchase, possess and consume recreational cannabis. This left Canadian employers to navigate uncharted waters and act as the test subjects for the introduction of this once illegal substance into the public sphere.

Going forward, employers can prepare themselves by taking positive steps to implement or update workplace policies including both accommodation and drug and alcohol policies. Remember, employers are also encouraged to train, educate and clearly communicate new and existing policies to managers and employees to ensure that everyone is up to speed on the company’s expectations. The best way for employers to protect their workplaces is to seek out professional legal advice. Contact us today to ensure that you are taking the correct steps.

Read our recent news articles and check out our recent infographic on this issue:

As detailed above, upon being elected, the newly minted Premier Doug Ford indicated that he would be making substantial changes to employment regulations in the province. In short, Premier Ford signalled that he wanted to ensure that people know that “Ontario is open for business.” Staying true to his word, on October 23, 2018, Premier Ford took action by countering the past regime’s legislation by introducing one of his own entitled, the Making Ontario Open for Business Act (“Bill 47”).

Bill 47 was officially passed on November 21, 2018 and effectively modifies or repeals a number of the amendments to the ESA that were originally imposed by the Fair Workplaces, Better Jobs Act (“Bill 148”). Key amendments relate to freezing minimum wage, modifying the Personal Emergency Leave entitlement and allowing employers to differentiate pay on the basis of employment status.

Bill 47 came into force on January 1, 2019. We urge employers to plan accordingly and consider the ramifications that this new Bill may have on your particular business. If your organization requires assistance complying with this new legislation, contact us today!

Read our recent blog post on Ontario’s recent shift from Bill 148 to Bill 47:

On April 26, 2018, the former Ontario government introduced the Pay Transparency Act (the “PTA”) with the aim of providing transparency within workplaces as it relates to compensation. The PTA was set to come into force on January 1, 2019 and would have required employers to publish salary figures in job advertisements, prohibit inquiries regarding an applicant’s compensation history and for larger employers, prepare an annual “Pay Transparency Report”.

However, on December 6, 2018, Premier Ford’s government officially passed the Restoring Trust, Transparency and Accountability Act (“Bill 57”) indefinitely delaying the PTA from coming into force. At this time, the future of pay transparency in Ontario is unknown – however, we will keep you up to date on future updates!

On December 6, 2018, Ford’s government continued its trend of upheaval by introducing the Restoring Ontario’s Competitiveness Act (“Bill 66”). Bill 66 proposes further changes to the ESA that will lessen employers’ statutory compliance obligations. The two primary amendments proposed by Bill 66 include: (1) no longer requiring employers to publicly display the “ESA poster” and (2) no longer requiring employers to obtain the Director of Employment Standards’ approval of excess weekly hours of work agreements or overtime averaging agreements.

At this time, Bill 66 has only passed it’s first reading in the Ontario Legislature, so don’t make any changes yet! However, stay tuned – we will continue to monitor Bill 66 as it proceeds through the Legislature and provide updates accordingly.

As was the case in 2017, throughout 2018, a new slew of legal decisions including, Nemeth v. Hatch Ltd., Amberber v IBM Canada Ltd., and Hampton Securities v Dean, further reiterated the importance of having compliant termination clauses. The courts continue to revisit and reformulate what constitutes an enforceable termination clause on a regular basis. However, the principle that has been consistently upheld is that employers will be held to a very high standard when seeking to defend an ambiguous or deficient termination clause. This makes it absolutely imperative for employers to ensure that their employment agreements and termination clauses are enforceable and will stand up to a high level of scrutiny!

Contact us today to make sure you have proper employment agreements in place to reflect this constantly evolving area of employment law.

Disclaimer: this post is intended for educational and non-commercial purposes only and is not intended to be a source of legal advice to any person in respect of any particular legal issue; it does not create a solicitor-client relationship with any readers. If you have a legal issue or possible legal issue, please contact us.